Which Bainbridge Island Neighborhood Suits You?

Bainbridge Island’s stunning views and small-town charm attract tourists and buyers alike. It’s also just a quick 35-minute ferry ride away from Seattle. If you are thinking of moving here, it’s best to get an idea of what distinguishes one part of the island from another. Across the island, you’ll find wonderful parks, beaches, hiking trails, and top-tier schools, but there are many different neighborhoods and types of homes. From downtown condos to family-owned farms, wooded retreats to waterfront estates, Bainbridge has an eclectic mix. Here’s an overview of the northern, central, and southern parts of the island. 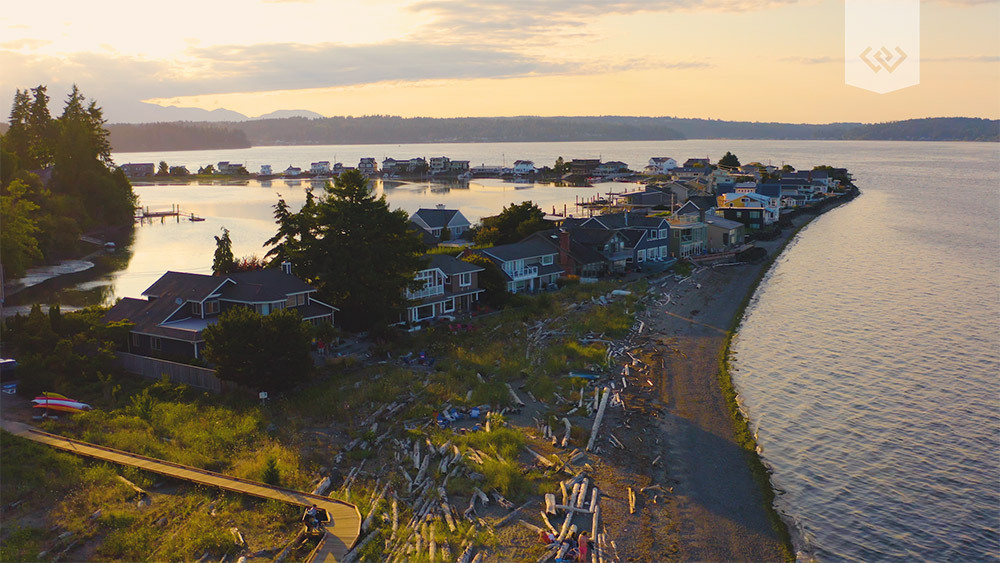 The Agate Point area is near Agate Pass Bridge, which connects Bainbridge to the rest of the Kitsap Peninsula. There are many homes in the woods and there are others that have water views. It’s also close to the Bloedel Reserve. A 150-acre island gem, the Bloedel Reserve was named one of North America’s Top 10 Botanical Gardens in 2020.

Another notable neighborhood is Port Madison. Homes typically have waterfront views and a New England feel. They’re also conveniently close to the Port Madison Yacht Club, and Fay Bainbridge Park, which has over 1,400 feet of shoreline. This area is also home to the newer Hidden Cove Estates, which has acres of open space and a waterfront park.

If you’re looking for a home with a view of the Olympic Mountains that’s also a waterfront property, consider Manzanita Bay. It has sandy beaches and it is near Meadowmeer Golf & Country Club and 90-acre Battle Point Park.

For a more rural take on island life, Rolling Bay is a quaint community with many homes on acreage. It’s a historic farming area and it’s near the central part of the island. So, you can easily get away from it all yet still be just a ten-minute drive from downtown Winslow. 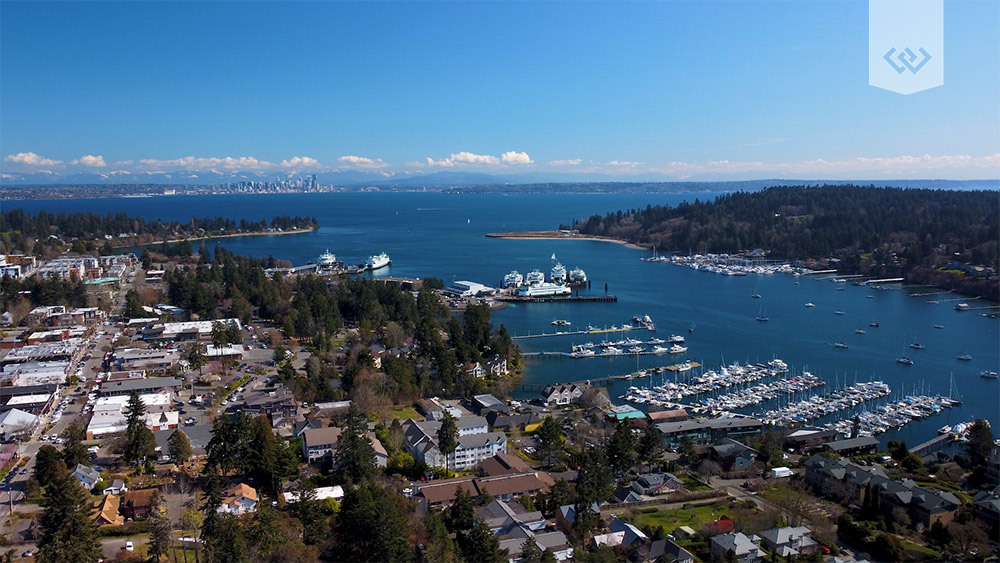 Central Bainbridge is where to go if you prefer a more urban lifestyle since it’s the economic center of the island, and where the ferry to Seattle is located. Manitou Beach and Murden Cove are perfect places to find a waterfront property with a view of the Seattle skyline.

Wing Point is another popular neighborhood with a variety of homes. Many houses are near Wing Point Golf & Country Club, and some have views of Eagle Harbor.

The cultural center of Bainbridge Island is downtown Winslow. It has interesting boutiques, award-winning restaurants, art galleries, and museums. Thanks to the highly engaged Bainbridge Island Downtown Association, there is never a dull moment. There are many local events including outdoor summer concerts, a great farmers market, and much more. Many properties are within walking distance of Winslow Way, including single-family homes and contemporary condos.

This area has excellent sun exposure and many homes in these neighborhoods have water and/or mountain views. This includes homes in Crystal Springs and Point White. Rockaway Beach and Port Blakely are also popular neighborhoods and there are many low bank waterfront homes there. Additionally, Port Blakely has newer homes built in the early 2000s.

Lynwood Center provides islanders on the south side with their own little downtown, and it’s home to the historic Lynwood Theatre. The surrounding area has grown in recent years with new developments and the renovation of Pleasant Beach Village. You’ll find a variety of shops and restaurants and it is unlike any other area, thanks to its Tudor-style architecture and unique history.

Near the southern tip of the island lies Fort Ward State Park, a 137-acre marine park with over 4,000 feet of shoreline on Rich Passage. The large Fort Ward neighborhood connects to part of Pleasant Beach Drive, which is often referred to as the Gold Coast of Bainbridge since it has many gorgeous, low bank waterfront homes on expansive lots.

After learning more about our island’s neighborhoods, you might be drawn to many of them for different reasons. Can you really go wrong when it comes to living on Bainbridge Island? We don’t think so. Each neighborhood is beautiful in its own way. It’s simply a matter of finding which one fits your wants and needs – and then finding the perfect home to match.

Related Articles
Community Community Spotlight: Bainbridge Island Saddle Club The volunteers of Bainbridge Island Saddle Club (BISC) make equestrianism accessible to locals. Powered by the efforts of community members, BISC provides a family-family environment for beginners and experienced riders to come together.  Take it from one of Windermere‘s Brokers Ashley Mathews. “Bainbridge Island Saddle Club is such a hidden gem in this community. Riders […]
Home Buyers 4 Tips for Buying a House in Our Strong Seller’s Market Many buyers are scrambling to secure their dream homes, especially since we have such a strong seller’s market here on Bainbridge Island. Multiple offer situations have become very common. Additionally, our agents know of many situations in which buyers are waiving inspections or are outbid by price or by all-cash offers. Not to worry, our […]
Home Buyers What To Consider When Buying Land To Build A House If you haven’t found the home of your dreams, you may be thinking about building it instead. Buying land and building your ideal home gives you the ability to customize as much as you want – or as much as your budget will allow. It is an exciting yet complex process so our real estate […]